Recently, the domestic office supplies industry event - "2011 Top Ten Brands of China Office Supplies" has come to an end. The list shows that Internet companies such as Staples, Odie, Yi Youbai, Omar, and Ai Keke are in the forefront. Five companies, which are headquartered in the form of OA entities led by Komi, followed by the top five brands including Miki, Qixin, Shenbei, and Aurora.

In recent years, due to the temptation of huge profits in the office supplies industry, a “gathering” trend has been formed in a short period of time. Various brands have rushed in and sought to obtain a share of this huge market cake. At present, the office supplies industry presents a situation in which several big brands dominate and other small and medium-sized brands compete fiercely. Big brands rely on their strong advantages to lead the industry, while small and medium-sized brands are caught in the “price war” of the Red Sea. With the development, the miscellaneous and disorderly phenomenon in the office supplies industry will be controlled and gradually disappear, and it will truly return to the healthy development of the normal competition of big brands. 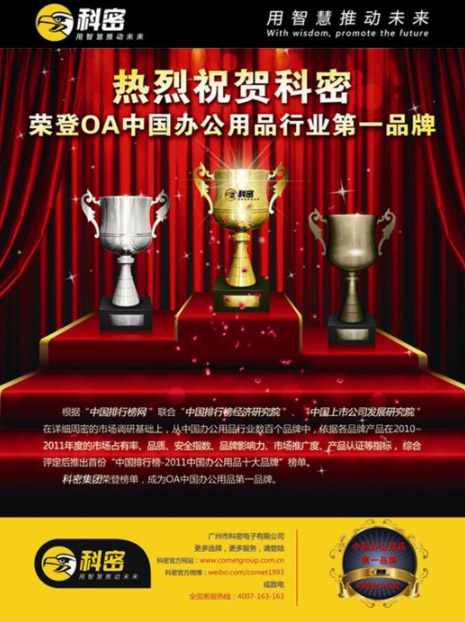 In fact, the rise of the big office supplies industry has accelerated the industry's reshuffle process. Major brands also took the opportunity to further stabilize their position in the industry. Among them, Comet's performance attracted the attention of industry professionals and consumers. It also made peer brands dazzle. This time,Comet topped the top ten brands of office supplies in China and ranked first in the OA field, once again verifying the strength of Comet brand and its status in the industry.

After more than ten years of stormy weather, Comet has grown into a leading brand in the industry. Understanding of the industry's competitive level has increased from product competition and product line competition to competition in the industrial model, further clarifying brand positioning. 2012 can be said to be an important year for the strategic transformation of the Kemi brand. In the face of new challenges and opportunities, Comet is ready. It is understood that in order to improve the product's competitive advantage, Comet strengthens cooperation with top European industrial design companies and increases product development efforts. It has established image processing and image algorithm studios, fingerprint arithmetic studios, facial recognition algorithm studios, and optics. The four R&D units including the projection studio. In addition, in order to strengthen enterprise management, Comet establishes an information management system based on the SAP system. No matter whether it is in hard power or soft power, the construction of Comet’s intensified efforts is very obvious.

According to an authoritative source, the company has won the honor of “Top Ten Brands for Office Supplies in China 2011” and has topped the OA field. This is the return that Comet Technology has been conscientious for many years and has made important contributions to the development of the industry. We have reason to believe that Comet Technology will regard honor as a driving force and use this as a new starting point to create a brilliant company. Comet will lead the office supplies industry, achieve strategic transformation, strive for a broader "blue ocean" and further implement the "go global" strategy.

Products
About Us
Quality Control
News
Video
Contact Us